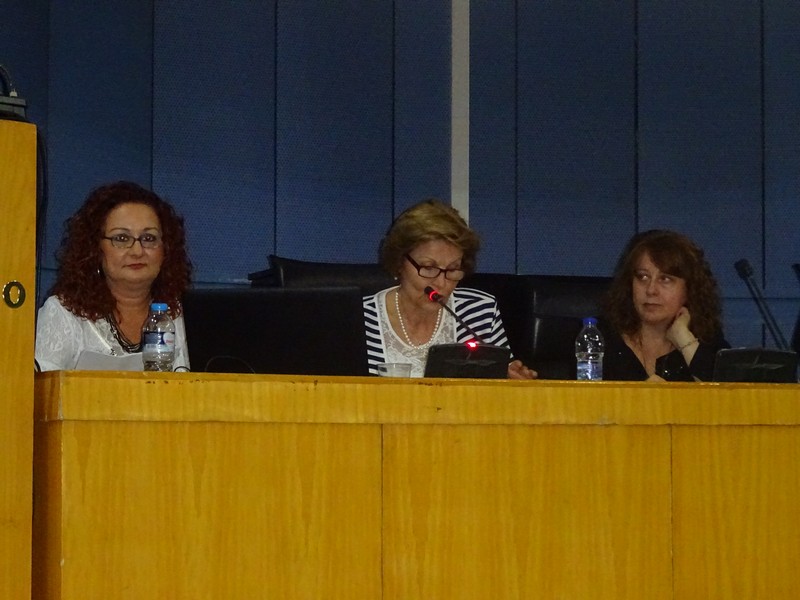 On the occasion of 30th anniversary of his death

On Saturday, November 3rd, 2018, an event - tribute to the person and work of the late folklorist Kitsos Makris (1917-1988) was successfully held at the Amphitheater “G. Kordatos” of the University of Thessaly in Volos, on the occasion of the 30th anniversary of his death and the participation of a large audience.

The event was co-organized by the University of Thessaly, the Volos Academy for Theological Studies, the Thessalian Research Association, the Cultural Organization of the Holy Metropolis of Demetrios “MAGNITON KIVOTOS,” the Lyceum Club of Greek Women-Volos, the Cultural Center “Iolkos” and the Book Center of Magnesian Authors.

The event was greeted by the Vice Rector of the University of Thessaly, Professor Dr. I. Laliotou, the Head of the Library and Information Center of the University of Thessaly Dr. I. Klapsopoulos, while Mrs. Karathanou, President of the Thessalian Research Association addressed the conference on behalf of the co-organizers. A first introduction to the life and work of Kitsos Makris was provided by the biographical documentary “Kitsos Makris. His Life in Images,” with reference to the photographer and his life partner, Kyveli Makri. The documentary which was edited by the daughter of the folklorist Thalia Makri-Skotiniotis, was followed by a series of talks.

The reputable speakers included: Eleonora Skouteri-Didaskalou, former Associate Professor of Folklore and Social Anthropology of the Aristotle University of Thessaloniki, spoke on the topic “Have you ever sought these traces? Kitsos Makris, an once for all case in the history of Greek folklore”; Teti Hatzinikolaou, historian-folklorist, Honorary Director of the Ministry of Culture and Sports, President of the Greek Department of ICOM, presented a paper on the topic “Folklorist and Collector. Approaching the folklorist collection of Kitsos Makris”; Dr. Maria Moschou, an art historian, scientific associate of the Department of Fine Arts of the Technological University of Cyprus, spoke on the topic “Kitsos Makris’ contribution to the institutional recognition of the newer material culture”; Dr. Aikaterini Kamilaki, former Director and scientific associate of the Hellenic Folklore Research Center of the Academy of Athens, spoke on the topic: “Kitsos Makris and Angeliki Chatzimichali. Folk handicraft at the service of local development”; Yiannis Kizis, Professor of the School of Architecture of the National Technical University of Athens, delivered a lecture on “The Architecture of Pelion and Kitsos Makris”; Kostas Liapis, folklorist and writer, member of the Board of Directors of the Book Center of Magnesian Writers, based on personal memories, talked about “The human side of Kitsos Makris.” Finally, the Kitsos Makris Folklore Center’s employees, Valia Karathanassi, a philologist and Maria Nanou, historian of Byzantine art, Director of the Department of Research Management and Conservation of Byzantine and post-Byzantine Monuments and Relics of the Volos Academy spoke on the topic "When the vision becomes reality: the Kitsos Makris Folklore Center, space of memory and creativity.”

The Event dedicated to the folklorist Kitsos Makris was completed with concluding intervention by His Eminence Metropolitan Demetrias and Almyros, Ignatios, who stressed the crucial work of Kitsos Makris for the fruitful reception of elements of our traditional culture in the present and the future.

To see the program of the event click here