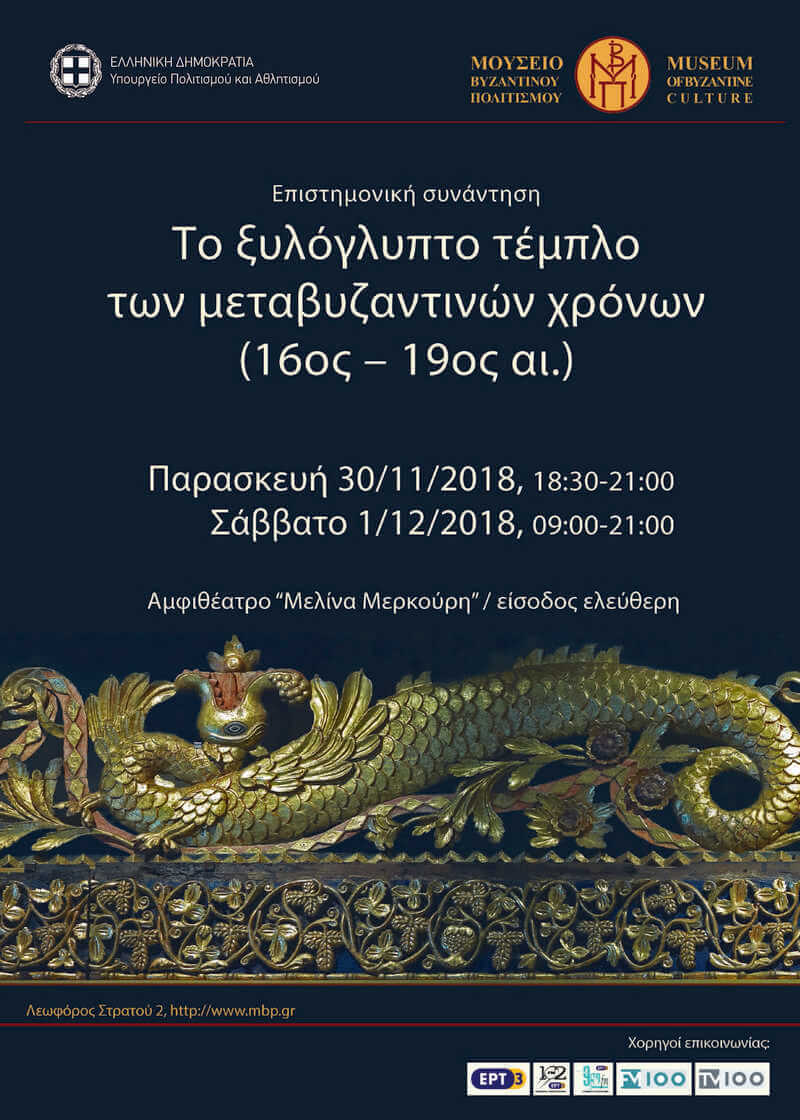 the Volos Academy for Theological Studies

On Friday November 30 and Saturday December 1, 2018 a scientific meeting, organized by the Museum of Byzantine Culture, on the topic “The wood-carved iconostasis of the Post-Byzantine times (16th - 19th c.)” was successfully held. Experts in Byzantine art along with a considerable number of people interested in the field attended the meeting, which was hosted at the “Melina Merkouri” amphitheater of the Museum.

The occasion for this scientific meeting was the periodical exhibition “TEMPLON. Sacred figures, Unvisible Gates of Faith, 20th and 21st Centuries,” which took place at the Museum of Byzantine Culture in 2017, as a result of the cooperation of the Museum with the Aikaterini Laskaridis Foundation and MVN Consultants. The scientific meeting explored and discussed issues related to the form, structure, typology, decoration, technique, semiology, function, aesthetics and terminology that concern the wood-carved iconostasis of post-Byzantine times.

A number of 36 scientists, archaeologists, art historians, architects and art conservators from Greece and worldwide, joined the meeting, who, with their extremely interesting contributions, covered not only the theoretical level concerning the concept and the liturgical-symbolic content of the post-Byzantine iconostasis, but also the technical-aesthetic, by studying and observing the technique and the theme of its decorative motifs. In this context certain remarkable post-Byzantine wood-carved iconostasis covering a large part of the orthodox post-Byzantine world, mainly in Greece (Thrace, Macedonia, Mount Athos, Thessaly, Epirus, Peloponnese, Ionian Islands, Aegean), Cyprus and Russia, were presented.

The scientific meeting was attended by the theologian-historian of Byzantine art Maria Nanou, Director of the Department of Research, Management and Conservation of Byzantine and Post-Byzantine Monuments and Relics of the Volos Academy for Theological Studies, who works at the Kitsos Makris Folklore Center, a department of the Library and Information Center of the University of Thessaly. Maria Nanou spoke on the topic: "The contribution of Kitsos Makris to the research on the art and technology of the wood-carved iconostasis of post-Byzantine times."

To see the full program of the Scientific Meeting click here