Recordings for the age of pandemic 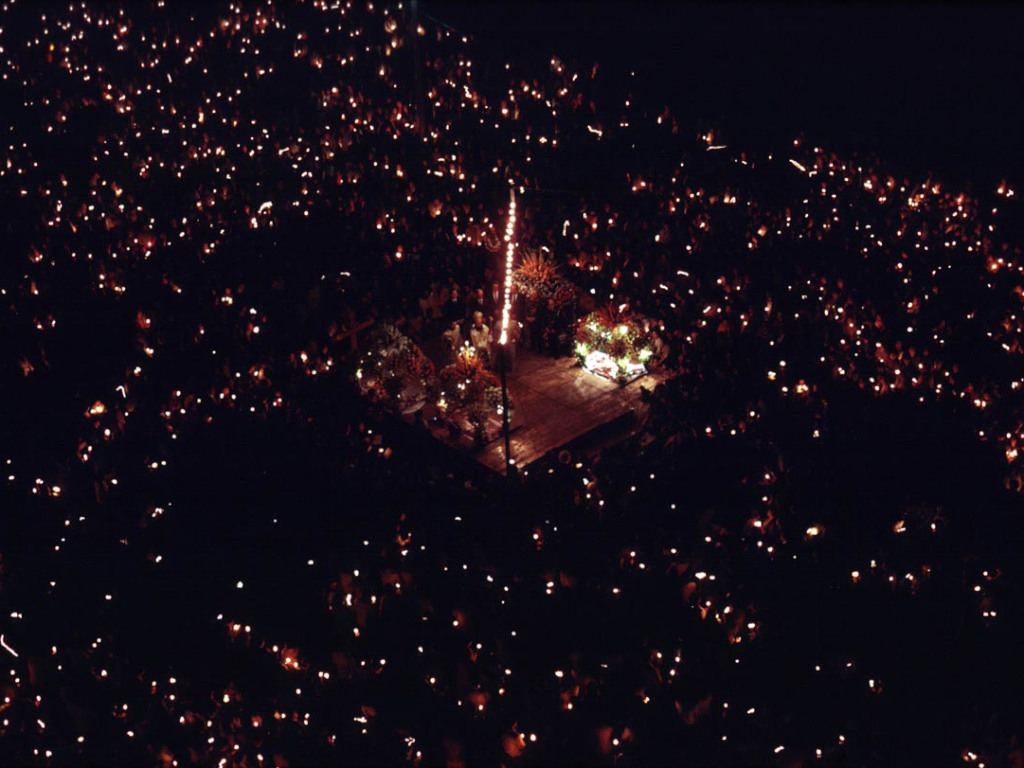 The restrictions imposed upon our movements this year, in order to prevent the spread of Covid-19, made us search for substitutes for the services of the Holy Week; sound recordings, photographs, videotapes. Live streaming from churches has become the latest craze. For sure, no recording or transmission is equivalent to the actual temple worship, but the current situation provides an opportunity for thinking back on what we have experienced in the churches the previous years.

A compilation of recordings from the ceremonies of this period has been published by Volos Academy for Theological Studies in 2014. The title of this album is “Hymns of Passion and the Resurrection from churches of eastern Thessaly”, and includes field recordings made by Costis Drygianakis between 1991 and 2002. It consists of a book with two CD’s, edited by Costis Drygianakis and Konstantinos Ch. Karagounis.

These recordings focus on ignored aspects of chanting (but also of the worship), coming almost exclusively from regional temples. The publications attempts, as stated in the press release that accompanied it, “to bring the lesser-known chanters into the sphere of visibility [...] taking a first step towards not only a better acquaintance with the generally ignored folk basis of chanting, which, while is often referred to as the cornerstone of the Byzantine tradition, has been scarcely studied in its details; but also as a step towards a more essential understanding of the aesthetics of Orthodox worship, which has also been largely overlooked in the last two centuries, in the effort to fit the church practice into a modern context”.

Samples from this release:

Among the various recordings of the services of the Easter period which have been published on vinyls and CD’s, Costis Drygianakis chose eight releases

1. The box set «Τα Πάθη τα σεπτά» (“The Holy Passion”) with recordings from the Patriarchal Church of Agios Georgios in Istanbul, published by the Hellenic Cultural Center of London under the supervision of Gregorios Stathis in 1981. The lead chanter is Vassilios Nikolaidis is the lead chanter and Vassilios Emmanouilidis the lambadarios. Sample

2. The three vinyl LP’s “Easter on Mount Athos” with recordings from Xenophontos monastery, curated by Rudolf M. Brandl and Diether Reinsch, 1979, reissued on a double CD in 1996. Sample

3. The CD «Βυζαντινή Πάτμος» (“Byzantine Patmos”), with the vespers of Easter Sunday from the Monastery of Patmos, produced by Manolis Karpathios, in 1995. sample 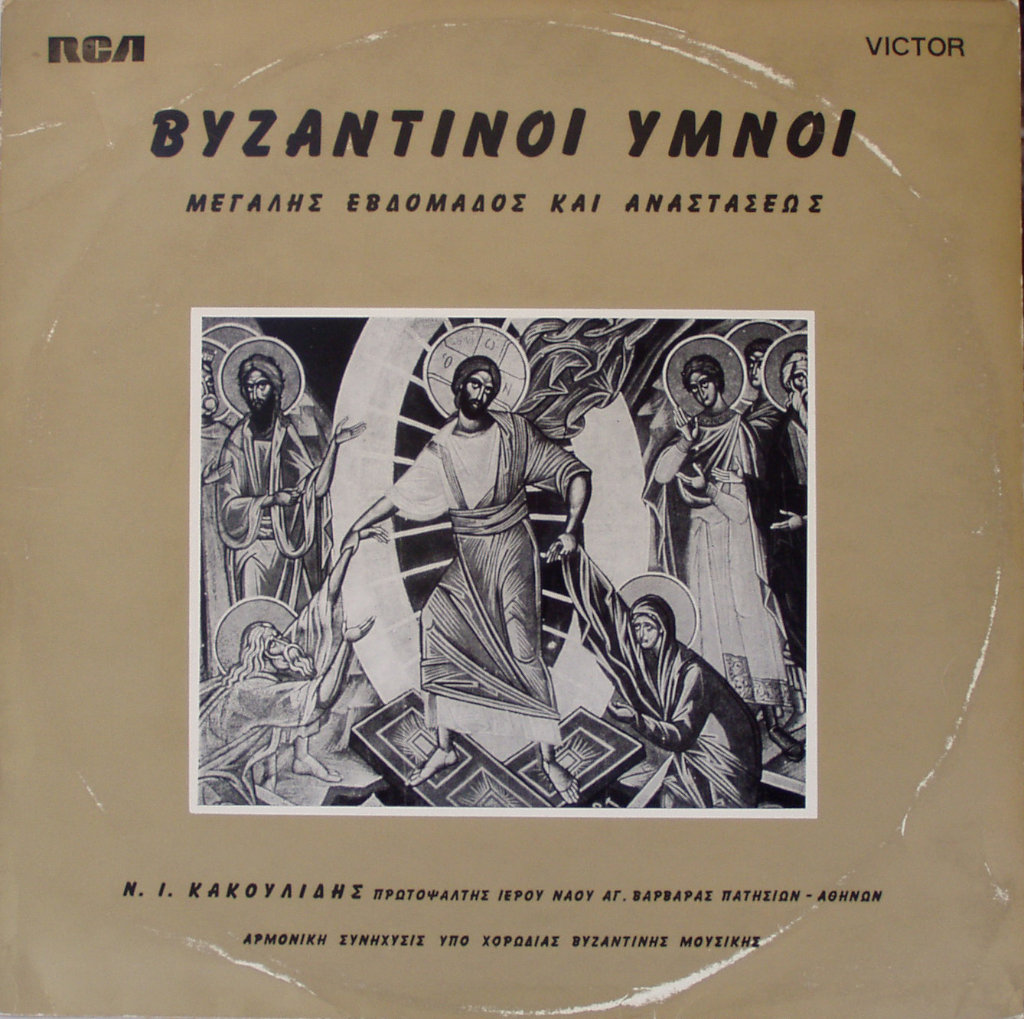 Among recordings of church hymns of the Byzantine tradition, which have been realized in studios and not in real services:

5. The album «Βυζαντινοί Ύμνοι Επιταφίου και Πάσχα» (“Byzantine Hymns of the Epitaphios and Easter”) by Simon Karas and the Choir of the Society for Dissemination of National Music, in 1976. sample

6. The CD «Μουσική της Ελληνικής Ορθόδοξης Εκκλησίας 1924 – 1930» (“Music of the Greek Orthodox Church 1924 – 1930”), which includes recordings by Petros Maneas, Emmanouel Vamvoudakis, Serafeim Gerotheodorou, Costas Thomaidis and others, plus polyphonic ones, curated by Petros Tambouris in 1996. Many of the recordings come from the Easter period. sample

7. The CD «Και ανυμνήσωμεν: Εκκλησιαστικοί Ύμνοι ηχογραφημένοι από την Μέλπω Μερλιέ το 1930» (“And Let's Sing in praise: Church Hymns Recorded by Melpo Merlier in 1930”), with recordings by Ireneos Papamichael the Metropolitan of Samos, Simon Karas and his choir plus two chanters from Megara, edited by Markos F. Dragoumis, Costis Drygianakis and Thanassis Moraitis in 2000. About half of the recordings are from the Easter period. sample

8. The album «Βυζαντινή Μουσική υπό του πρωτοψάλτου της Μεγάλης του Χριστού Εκκλησίας Ιακώβου Ναυπλιώτου» (“Byzantine Music by the leading chanter of the Great Church of Christ, Iakovos Nafpliotis"), with his recordings dating back to 1914, 1916 and 1926, curated by Antonis Aligyzakis in 2008. Many of the included recordings are also related to Easter period. sample

The museum in Makrinitsa (Pelion, Thessaly/Greece) is a place where religious art, piety and folk tr...
Volos Academy for Theological ...

The Conference “Politics, Society and Culture in Orthodox Theology in a Global Age” took place in Vo...
© 2017 - 2020 acadimia.org