The Director of the Volos Academy for Theological Studies Visits Lebanon 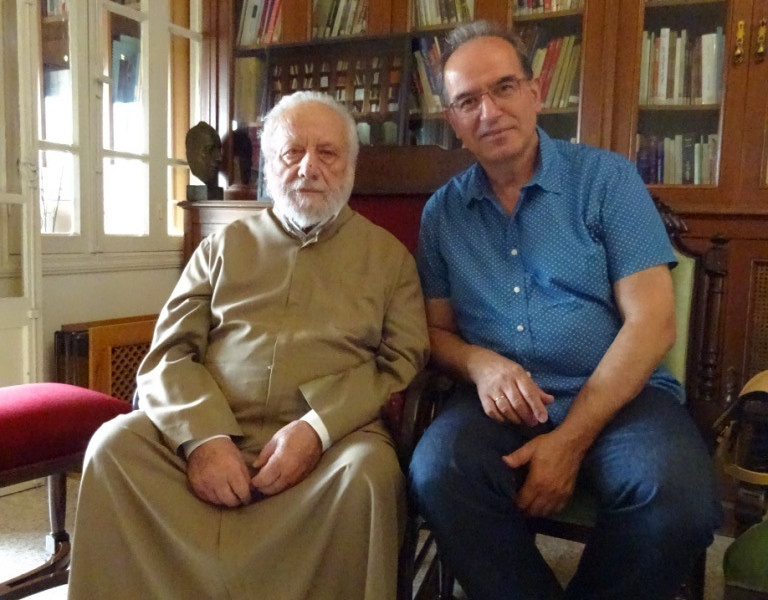 On Tuesday morning, September 21, 2017, Dr. Kalaitzidis had the opportunity to visit Metropolitan of Mount-Lebanon Georges Khodr at the headquarters of his Diocese in the small town of Brumana on the outskirts of Beirut. Dr. Kalaitzidis conveyed to His Eminence the warmest greetings of Metropolitan Ignatius of Demetrias. He also briefed him on the recent activities and programs of the Volos Academy, the recent English-language publications of the Academy and particularly those of the “Doxa & Praxis: Exploring Orthodox Theology” series, published in collaboration with the World Council of Churches, as well as about a volume for the dialogue between the Eastern Orthodox and the Oriental Orthodox Churches edited by Mrs. Christine Chaillot. He also presented to him the group photo of the recent international consultation on “Orthodoxy and Interreligious Encounter in a secular age,” organized by Volos Academy and the Department of Theology and Religion of Exeter University (UK) in Volos (15-17 September 2017), signed, with warm thanks and wishes for his contribution to Orthodox theology of religions, by all the participants in the consultation. The Director of the Volos Academy discussed with His Eminence Metropolitan Georges and his associates the details of a publication under preparation in the framework of the “Doxa & Praxis: Exploring Orthodox Theology series” with papers by the distinguished hierarch about Antiochean Christianity and Christians in the Middle East, the theological interpretation of Islam and the Islamic-Christian dialogue.

On the evening of the same day, Dr. Kalaitzidis met with the General Secretary Fadi Nasr, the former General Secretary Tony Khouri, and representatives of the active Orthodox Youth Movement of the Patriarchate of Antioch (Mouvement de jeunesse orthodoxe-MJO) and discussed with them issues concerning the challenges that Orthodox Church and theology today face at a global scale, while they explored possibilities for further cooperation between the Volos Academy and the Movement of Orthodox Youth. It is noteworthy that during the Bright Week of 2012, Dr. Kalaitzidis gave a lecture, attended by His Eminence Metropolitan Georges Khodr, at the Beirut offices of MJO on “Orthodoxy Facing the Challenges of the Modern World,” while a number of his articles have been published in the journal Al-Nûr of the Orthodox Youth Movement in Arabic translation.

On Friday, September 20, the Director of the Volos Academy for Theological Studies visited the Orthodox University of Balamand, near Tripoli, Lebanon, where he had important contacts and meetings with: the Vice President for Planning and Educational Relations of the Orthodox University of Balamand, Dr. Georges Nahas, a former board member of the World Fellowship of Orthodox Youth “Syndesmos”; Dr. Elias El-Halabi, Associate Director of the Sheikh Nahayan Center for Arabic Studies and Intercultural Dialogue; Dr. Souad Slim, Professor of History and Director of the Section of Documentation and Antiochean researches; the Dean of the Institute of Orthodox Theology, Rev. Dr. Porphyrios Georgi (who also took care of the transportation, and visit of Dr. Kalaitzidis and his wife to Balamand). The Director of the Academy for Theological Studies had the opportunity to discuss with them the current difficulties and problems faced by Orthodoxy, as well as the promising signs of revival of Orthodox theology, and the possibility to co-organize joint conferences in the framework of a wider cooperation. The visit to Balamand concluded with the pilgrimage to the Holy Patriarchal Monastery of the Assumption of the Blessed Virgin Mary, the Manuscript Conservation Department hosted in the Monastery, the Orthodox parish of the village of Kaftoun and finally the Monastery of Panagia Kaftoun where the double-face icon of Panagia Hodigitria and the Baptism of Christ, and the recently discovered wall paintings in the church of Saints Sergius and Bachus. During the visits Dr. Kalaitzidis and his wife were accompanied by Rev. Dr. Bassam Nassif, Assistant Professor of Pastoral Theology at the Institute of Orthodox Theology of the University of Balamand.

During his stay in Beirut, the Director of the Volos Academy met also with Professor Antoine Courban of Université Saint-Joseph, Editor-in-Chief of the well-known French speaking journal “Travaux et Jours” published by the same University, which in its forthcoming issue is to host a paper by Dr. Kalaitzidis on “Orthodoxy and Modernity” in a French translation.

Dr. Kalaitzidis’ visit concluded on Sunday, September 24th, with the Divine Liturgy at the Orthodox Church of St. Georges in Ashrafieh, Beirut, celebrated by the Greek speaking priest Rev. Justinos Dib, who preached also to the congregation. The active and substantial participation of the whole body of the Church in the service and chanting was moving and impressive. This participation bore witness to the fruits of the liturgical renewal that has successfully taken place within the last decades in the Greek Orthodox Patriarchate of Antioch. Dr. Kalaitzidis thanked Fr. Justinos and Deacon Maximos/Gaby El Murr for their warm reception and hospitality during his stay in Beirut.

PrevNext
Presentation of the activities...

With the Participation of the Volos Academy for Theological Studies January 10, 2020, Brussels (Bel...
International Conference: Poli...

An interesting conference with 32 participating scholars from 15 countries (Greece, Germany, Bulgari...
Publication of a collective vo...