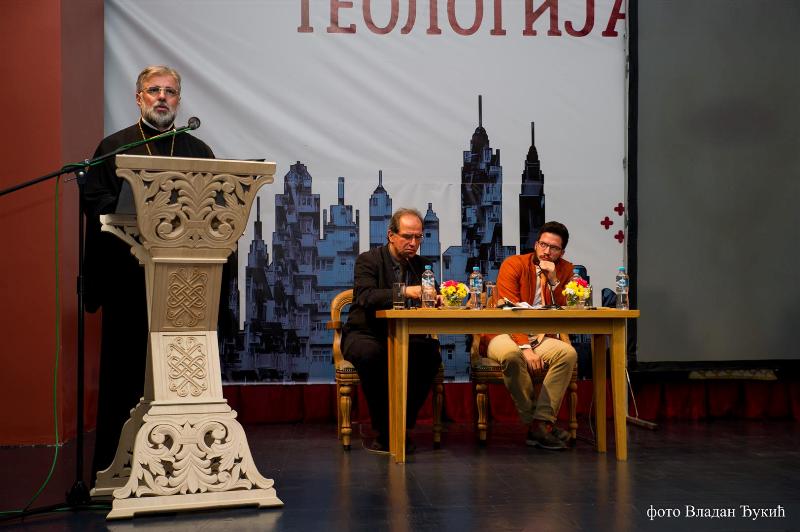 At the invitation of the Orthodox Diocese of Zahumlje and Herzegovina (Bosnia-Herzegovina) and the Theological Faculty of the University of Belgrade, Dr. Pantelis Kalaitzidis, Director of the Volos Academy for Theological Studies delivered a series of lectures on timely topics of Orthodox theology.

1. On Saturday, February 11, 2017, Dr. Kalaitzidis spoke on the topic “Orthodoxy and Modernity” at the crowded hall of the Municipal Cultural Center in Trebinje (Serbian Republic of Bosnia-Herzegovina). In his lecture the Director of the Volos Academy raised the question whether Orthodoxy came to a halt before modernity and whether Orthodox Christian theology operate only within traditional contexts, borrowing its forms and representations from the agrarian society with which its liturgical symbolism is connected, as are the rhetorical examples used in preaching, the structure of Church administration and especially the established ideas about the relationship between the sacred and the secular, religion and politics, the Church and society.

He further asked whether Orthodox Christianity has accepted the vested rights that come with modernity and their consequences in the religious, social and cultural fields, or do we Orthodox long for the organizational schemes and structures of our glorious past, in accordance with the imported logic of fundamentalism, interpreting even post-modernity itself as the revenge of the Church and religion against modernity. He finally mentioned that modernity and post-modernity (or late modernity) and the framework they define constitute the broader historical, social and cultural environment within which the Orthodox Church is called to live and carry out its mission, where it is called upon time and time again to incarnate the Christian truth about God, the world and humanity.

Dr. Pantelis Kalaitzidis was the key-note speaker at the conference titled “Theology in the public space”, organized by the Orthodox Diocese of Zahumlje and Herzegovina at the newly established Center for Philosophy and Theology. The topics discussed during the conference were the following: 1) Synodality and Unity of the Church in 21st Century (A retrospect of the Holy and Great Council in Crete), 2) Europe at the Crossroads: Crisis and Future of European Identity, 3) Fear and Freedom, 4) The Place and Role of Women in Church and Society. At the end of Kalaitzidis’ presentation and the following very interesting discussion (of which both the translation from English to Serbian was facilitated by Dr. Marko Vilotic, the Assistant Professor of the Theological Faculty of the University of Belgrade), Bishop Gregorios of Zahumlje and Herzegovina expressed his thanks to all of those who contributed to the success of the conference, while addressing the key-note speaker, he mentioned: “allow me to express my gratitude to professor Kalaitzidis for his inspiring and enlightening lecture we have just heard. We are very grateful for his presence and honoured to have such a distinguished Orthodox scholar among us. It is my personal opinion that Professor Kalaitzidis is a breath of fresh air in contemporary Orthodox theology and we hope this is just the beginning of a beautiful friendship between our two institutions: the Volos Academy of Theological Studies and the Centre for Philosophy and Theology in Trebinje”.

The Center for Philosophy and Theology (CEFIT) with the initiative of Bishop Gregorios of Zachoumiou and Herjegovina, has been founded in Trebinje in 2016, with the following purposes:

These purposes are to be fulfilled through following activities:

To read the abstract of Dr. Kalaitzidis’ lecture click here.

2. On Monday noon, February 13, 2017, the Director of the Volos Academy for Theological Studies was invited to join the post-graduate seminar on Canon Law at the Theological Faculty of the University of Belgrade, run by Dr. Rastko Jovic, Assistant Professor, where he delivered a lecture on the topic “Baptismal and Ethno-cultural community: A case study of Greek Orthodoxy”. Dr. Kalaitzidis highlighted the difference between the ecclesial and ethno-cultural identity, while he described the gradual transformation of the church from a baptismal community into an ethno-cultural community as a result of the oblivion of the eschatological consciousness and vision of the church, the loss of the dialectical tension between eschatology and history, the church and the world, the desert and the empire, in other words, what happened over time is a gradual slide from the realm of the ecclesiological hypostasis to the ethno-cultural one. He further pointed out the problems and distortions that the understanding and the constitution of the Church in terms of national identity create to the ecclesiastical body, debilitating its theological and spiritual resources of the patristic and Eucharistic tradition in an “identities” rhetoric and in a outdated religious tribalism which comes at a stark contrast to Gospel’s call for supraracial, even supranational, identities and communities. The lecture was followed by a fervent discussion with the students, where diverse canonical and theological issues raised by the lecture, were further discussed.

3. On Monday evening, February 13, 2017, the Director of the Volos Academy for Theological Studies delivered a public lecture at the Grand Hall of the Theological Faculty of the University of Belgrade on the topic “New Wine into Old Wineskins? Orthodox Theology of Mission Facing the Challenges of a Global World”. In his presentation, Dr. Pantelis Kalaitzidis presented on the one hand, the significant contribution of the Orthodox theology of mission to the global Christian community and the ecumenical theology, regarding issues of missiological interest: From the foundation of mission in Trinitarian theology, and the theological reflection on the charismatic boundaries of the church, to the mission as diakonia and “liturgy after liturgy,” as a common Christian witness, and interfaith dialogue. In addition, he argued that the 20th century Orthodox mission had the significant advantage of being dissociated from colonialist attempts, expansive political projects, or aggressive proselytism. At the same moment and despite this positive perception of mission, he raised possible questions about the problems (and the challenges) that render often very thin the contribution of Orthodox theology of mission, especially in relation to the progressive demographic shift of Christianity from the North (mainly Europe, and the Americas), to the Global South (mainly Asia, Africa, and Latin America) such as: the close identification of Orthodoxy with the byzantine model and culture, the difficulty of the incorporation and integration of the Orthodox faith in each particular culture (inculturation), the almost exclusive recourse to the ontological language, even when they come to the Global South, where most of the peoples and languages don’t even have, use, or know the verb “being,” the close relationship with the national idea and national narrative, in other words to the phenomenon of “national Orthodoxy,” the constant negative attitude towards the Globalization and the various achievements of modernity, the identification with some form of spirituality, accepting for itself to be relegated to the realm of mysticism and the exotic or mystical version of Christianity, the almost total absence of any serious engagement with the political, liberation and feminist theology which focus on the social dimension of the Christian message. At the end of his presentation Dr. Kalaitzidis was referred to a positive and encouraging sign, i.e. the revalorization of mission, and the rediscovery in today’s Greek Orthodox theological context of mission as a co-constitutive element of the making of the church. The lecture was attended by a considerable number of students and Professors of the Faculty, while an interesting and vivid discussion took place, facilitated by the invaluable help in the translation (from both English and Greek) by Rev. Dr. Zdravko Jovanovic, Assistant Professor of Patristics of the Theological Faculty and Dr. Dalibor Dukic, Lecturer of the Law School at the same University.

To read the abstract of Dr. Kalaitzidis’ presentation click here.