Regional Pre-assembly Consultation of the Conference of European Churches (CEC) 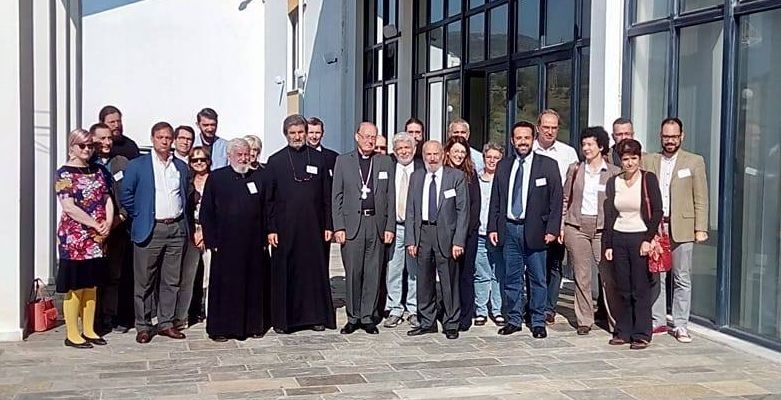 On October 4 – 6, 2017, the third in a series of regional consultations leading to the 2018 CEC General Assembly in Novi Sad was successfully held in Volos Academy for Theological Studies, Volos, Greece, attended by various representatives from CEC Member Churches in Southern Europe (bishops, priests, lay theologians, etc). The participants contributed to the debate on the future of Europe which has been launched by an Open Letter on the Future of Europe issued by the CEC Governing Board in 2016. The Churches are called to take seriously the voice and the concerns of the people of Europe described in the Letter.

The participants analyzed the issues raised by the Letter from a theological and socio-political point of view. They came from various countries, from Portugal to Armenia. Many different Christian traditions were represented, including also minority churches; Armenian Apostolic, Orthodox from Greece, Rumania and Serbia, Evangelicals from Spain and Greece, and also Methodists from Italy and Portugal.

The consultation was opened by CEC Vice-President, H. E. Metropolitan Emmanuel of France (Ecumenical Patriarchate), who pointed to the contribution of CEC as framework for sharing and reflections on what the role of Churches can and should be. In his intervention CEC President Rt Rev. Christopher Hill KCVO, DD (Church of England), highlighted the importance of listening to the voices of the Churches from the entire region. In his greeting, H.E. Metropolitan Ignatius of Demetrias (Orthodox Church of Greece; delivered by Rev. Dr. Amphilochios Miltos), spoke openly and honestly about the current challenges Greece faces. Since the Church of Greece is an integral part of the Greek society, some of those issues are vital for the Church, too. Metropolitan Ignatius also highlighted that the crisis let opportunities occur: e.g. Church and people came closer together. Rev. Meletis Meletiadis, President of the Evangelical Church of Greece, emphasized that particularly in the time of crisis Churches need each other. He highlighted the good local ecumenical cooperation in the Volos region. He also informed on the work of his Church in assisting those at the margins of the society and in particular migrants and asylum seekers. Finally, in his welcoming greeting Dr. Pantelis Kalaitzidis, Director of the Volos Academy for Theological Studies, pointed out the importance of the gathering for the future of Europe in the midst of the current challenges, and the position of the Churches in this regard.

One of the keynote speakers, President and Professor of the School of Economic Sciences at the University of Thessaly (Greece) Dr. Michalis Zoumboulakis, presented an overview of the political and economic history of the 20th century Europe with special emphasis on the several factors led to the present crisis. In his keynote address Dr. Petros Vassiliadis, Professor Emeritus of New Testament at Aristotle University of Thessaloniki (Greece), reflected on the general theme of the consultation by presenting the view that Churches should not adopt an excessive modernism; neither they should follow a blind traditionalism. In his speech he also highlighted the need for remaining faithful to tradition but always seeking new expressions of and for the faith.

Those gathered enjoyed the opportunity to learn more about the local setting from H.E. Metropolitan Ignatius of Demetrias (talk delivered by Rev. Dr. Amphilochios Miltos) who outlined the contribution of the Orthodox Church of Greece to the overcoming of the current economic crisis. Ms. Despina Tsianou, from the local diocese, based on her experience, reflected on the role and position of the Christian family in Europe and the cooperation of the Churches in Greece in front of the current challenges; Rev. Meletis Meletiadis briefly described the contribution of the Greek Evangelical Church with regards to the refugee crisis in Idomeni (North Greece); Ms. Maria Koutatzi from Caritas Hellas outlined the current social-economic landscape in the country, the implications of the economic crisis and what the Roman Catholic Church does to mitigate the suffering it has brought. During small group and plenary work, Church representatives discussed their different national contexts, especially relating to minority-majority Church relationships and to Church-State relationships. Many stressed the importance of learning more about each other and the diversity of our respective societies to foster respect for different parts of the European continent. Many in the group were concerned with how to promote one inclusive European narrative and strengthen the place of a Christian voice in promoting hope for the future of Europe.

The next scheduled consultation will take place in Prague (Czech Republic) on 30 November – 1 December 2017.

The present press release is partly based on the one issued by the Conference of European Churches (http://www.ceceurope.org/what-future-for-europe-churches-in-southern-europe-on-the-road-to-cec-2018-general-assembly/)

To read the welcoming greeting by H.E. Metropolitan Ignatius of Demetrias click here

To read the text of the intervention by H.E. Metropolitan Ignatius of Demetrias click here

To read the text of the keynote speech by Prof. Emeritus Petros Vassiliadis click here

Photos of the conference courtesy by Mr Henrik Hansson