An International Conference on “Orthodoxy and Fundamentalism”, May 10-12 2018, Belgrade, Serbia 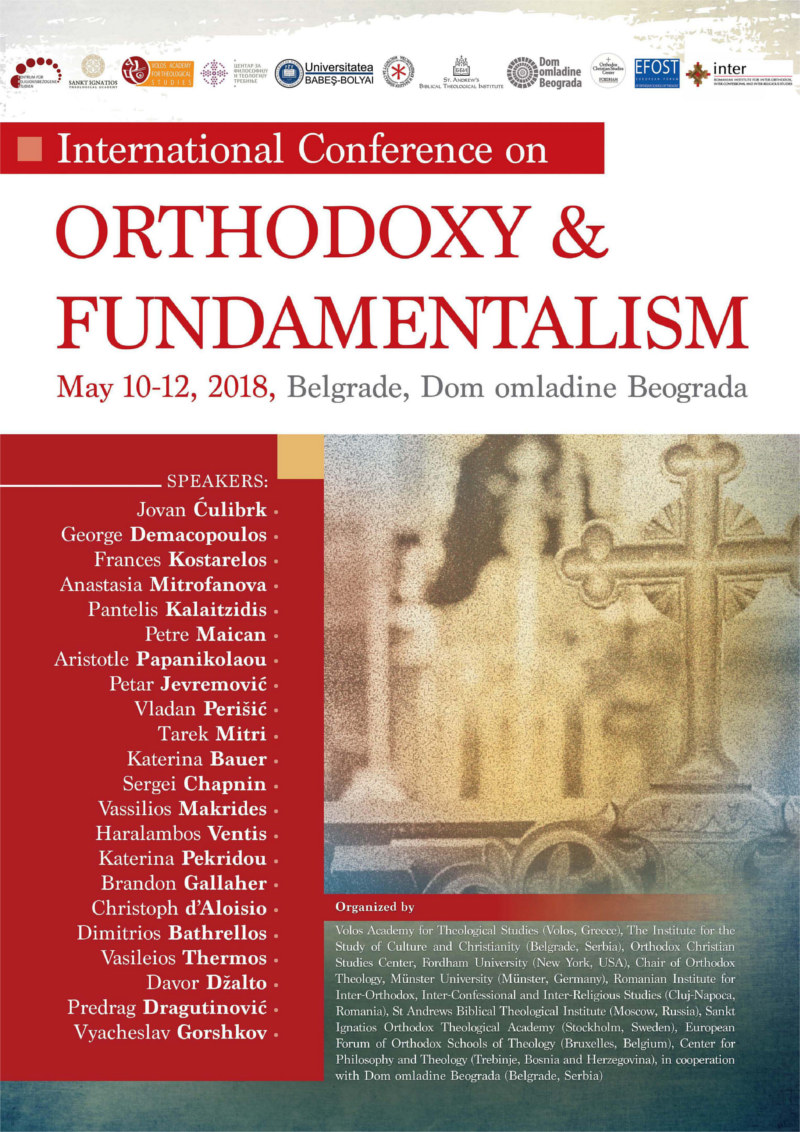 An International Conference on “Orthodoxy and Fundamentalism” will be held on May 10-12, 2018, in Belgrade, Serbia. The conference is organized by the Volos Academy for Theological Studies in co-operation with the Institute for the Study of Culture and Christianity (Belgrade, Serbia); the Orthodox Christian Studies Center of Fordham University (New York, USA); the Chair of Orthodox Theology of Münster University (Germany); the Romanian Institute for Inter-Orthodox, Inter-Confessional and Inter-Religious Studies (INTER, Cluj-Napoca, Romania); St Andrews Biblical Theological Institute (Moscow); Sankt Ignatios Orthodox Theological Academy (Stockholm, Sweden); the European Forum of Orthodox Schools of Theology (EFOST, Bruxelles), and the Center for Philosophy and Theology (Trebinje, Bosnia-Herzegovina). With the support of the Dom omladine Beograda

In the context of late modernity, the Church and its theology are called with boldness to effectively address the challenges posed by the rapid development of the sciences, the gradual dominance of anti-democratic perceptions and practices, the marginalization of the weak of the world by implementing in practice the sacrificial ethos being taught by its Lord, Jesus Christ, in the perspective of the coming Kingdom of God who will ultimately judge the truth of beings and history. In the light of the biblical and patristic tradition, any trace of fundamentalism, contrary to the continuous incarnation of the Gospel in the world and history, the opening and the response of the Church to every other, can only be rejected as an expression of both an anti-Christian spirit in general, an anti-Orthodox morality in particular.

International Conference on: “Orthodoxy and Fundamentalism”

Conservatism, Fundamentalism and Identity Politics in the Arab world

The Recent Invention of "Traditional" Orthodoxy

Giving the Laity its Voice Back: One Way to Tackle Fundamentalism in the Eastern Orthodox Church

Dr. Sergei Chapnin , Fellow at the University of Innsbruck, Austria, Former Editor of the Magazine of the Moscow Patriarchate (Russia)

Matilda & Matilding: The Rise and Fall of the Radical Orthodox Fundamentalists in Russia

The Notion of Orthodoxy as the Sole True Faith: A Particular Source of Orthodox Christian Rigorism

Fundamentalism in the Orthodox Church: Intrinsic or Transient?

Conversion to Orthodoxy in North America and Orthodox Fundamentalism: A Personal View

Fundamentalist Hermeneutics as a Risk in Education

Epistemology of the Radicalized Faith

Roots of Orthodox anti-Western Fundamentalism in the Church of Greece

Fundamentalism: Theology in the Service of Psychosis

How to be the Right Kind of “Fundamentalist”?